The muscle car is a definitive icon of American culture that spans more than six decades and endures to the present day. These powerful, fast cars are built for the average driver but often have huge V8 engines.

What's more, they tend to be surprisingly affordable and continue to attract veteran and novice car enthusiasts alike. In this article, you'll discover the best muscle cars on the market, with key information about features, engine power and what sets each one apart.

Classic American muscle cars have been around since the late 1940s, beginning with the Oldsmobile Rocket 88. It featured an overhead-valve and high-compression V8 engine, leading the way for these coveted compact powerhouses.

Despite this, the term “muscle car” wasn't coined until the late 1960s, when it was used to describe the bold, loud, screechingly fast new cars that were dominating the Saturday night cruising scenes of that time. Examples include the Pontiac GTO, Chevrolet Chevelle and Ford Shelby Mustang.

Back in those days, gas prices were lower, so manufacturers prioritized bringing thrilling speed and colossal horsepower to the average car buyer.

The race for the lowest quarter-mile time began around the same time, fueling the production of these small but mighty autos. (One of the modern muscle cars on our list claims the current title as of 2021.)

With tech advancing at the speed of light and the Clean Air Act putting the kibosh on fuel-guzzlers, muscle car specs have changed a little. They usually come with smaller engines and an exhaust switch to quiet exhaust tone but still offer epic performance at an affordable price.

We've conducted extensive research to come up with the following muscle car list ranking, from publications such as Edmunds, Forbes, Car and Driver and U.S. News & World Report.

Our team of hot rod experts has factored in heritage, value, speed and safety to compile this definitive list. Keep reading to learn about the toughest muscle cars for 2022. Coming in at 10th on our list of the best muscle cars is the Chevrolet Impala Premier. The 1961 original muscle car appears twice on Forbes' list of the most popular classic cars in America, and at various stages over the years the Impala was the stock car used by Chevrolet in NASCAR racing.

The iconic muscle car was inspired by the 1963 Impala Sport Coupe, which had dual carburetors on aluminum intake manifolds and boasted 425 horsepower, hitting 60 mph in approximately 6.3 seconds. The 2020 model year reaches 60 mph in just 6.2 seconds. Best for: Power and luxury

It may seem odd seeing the refined German 5 Series sedan lined up with raw American supercars like Mustang, Camaro and Corvette, but in terms of power there is very little difference. The base model 530i starts with a perky turbocharged four-cylinder engine, but as you progress through the 540, 550 and on to the Competition M5 models you’ll reach a twin-turbo V8 that can generate more than 600 horsepower. Of course, the true beauty of a BMW comes in its incomparable attention to detail. This understated yet magnificently performing car routinely places it in top 10 lists for the best luxury sedan in the world.

Start browsing for a used BMW 5 Series in the Rocket Auto inventory today. The next best muscle car on our list is the Cadillac CT6 Platinum, with all-wheel drive and a satisfyingly forceful 404 horsepower twin-turbo 3.0-liter engine.

Despite its relatively hefty 4,400-pound body, the ride is reassuringly smooth, and you don't have to compromise speed at night thanks to exceptional night vision.

The 1967 Cadillac Eldorado was a stunning classic muscle car, and the 2020 CT6-V is touted as a modern classic. Drivers looking for a similar affordable version can opt for the more reasonably priced CT6. 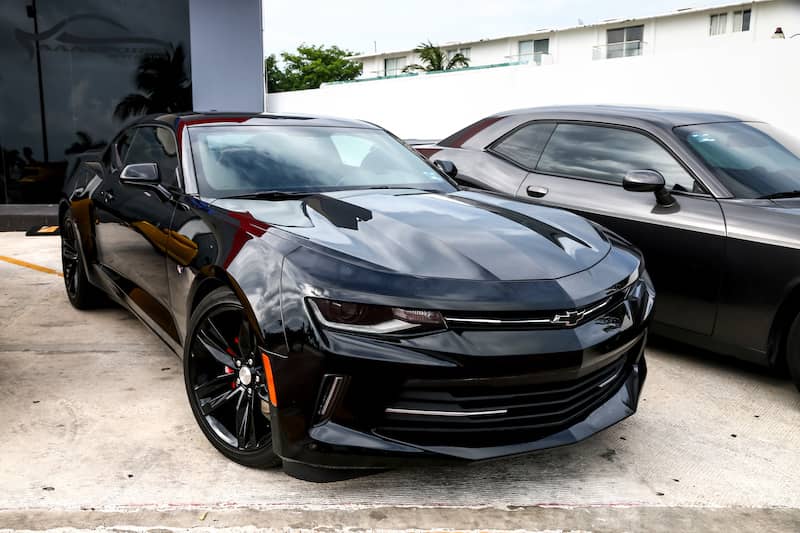 Now we're getting serious, with the seventh best muscle car model on our list: the Chevrolet Camaro. When it comes to old muscle cars, the Camaro has always been a contender, especially the 1967 model with its small block engine.

Four states have voted it as the best classic American muscle car in the United States in Forbes' list, and it makes the top 10 in most 2020, 2021 and 2022 muscle car lists.

Consider the 2021 Camaro LT1, with its strapping 6.2-liter V8 engine and exceptional thrust. Despite its 445-horsepower, the motion performance is super smooth and cohesive thanks to spectacularly lithe handling. On to the sixth best American muscle car on our list – the Jeep Grand Cherokee. Stats are taken from the 2017 SRT model, which features an explosive hemi V8 engine with 475 horsepower.

While it might not fit the classic description of a muscle car, the Grand Cherokee features the same engine as the Dodge Challenger SRT8. Jeeps have always been best with a V8 oversized engine; they're just not as small as a typical American production muscle car. The Tesla S can't be described as a classic American muscle car, although it has many of the benefits with none of the drawbacks. From a sleek, sporty body to eye-watering speed – all that's missing from this cool muscle car is the V8 engine.

With its 754 horsepower, we don't think anyone is going to complain about the (cheaper) electric engine. Not when you can reach speeds of up to 155 mph without breaking the bank for fuel costs.

The Dodge Challenger is undeniably one of the best muscle car models of all time. Muscle car fans are probably familiar with this model, whether they love old or modern muscle cars.

There's something beautifully nostalgic about new Dodge Challengers, with their delightfully boxy exteriors and retro-style lights. And they come with an array of customization options for those of you who love to make your vehicle truly your own.

For an example of this behemoth's prowess, take the 2021 Dodge Challenger R/T Scat Pack Widebody Coupe. It has a swaggering V8 engine with 485-horsepower and 475 ft-lb of torque, making it one of the most traditional modern American made muscle cars on the market. 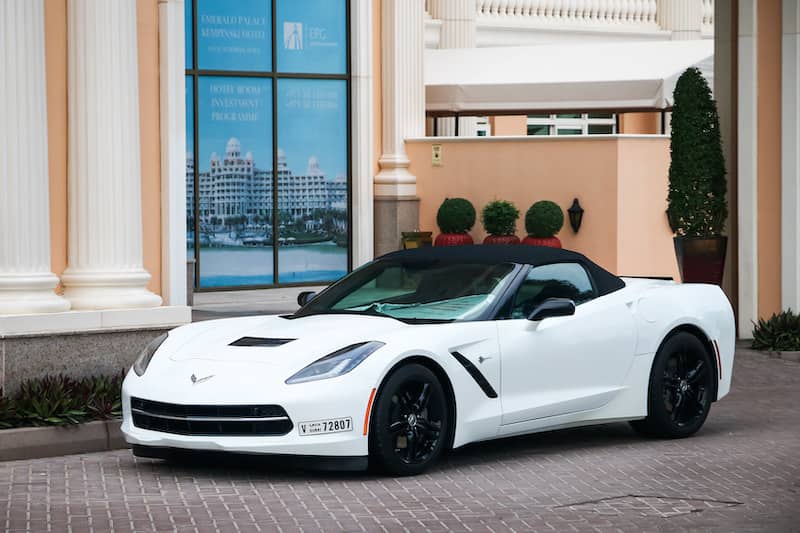 Since its debut in 1953, the Chevrolet Corvette has come to occupy a rare place in American automotive history. Over multiple generations, the Corvette has maintained a distinctive styling that makes it instantly recognizable anywhere in the world. While never an inexpensive car, the Corvette has always been within financial reach of a hardworking sports car dreamer who typically saw him or herself as having “arrived.”

As a muscle car, Corvette does its best impression of a luxury sports car, with nothing spared in terms of interior options and finishes. In the arms race for horsepower over the last 10 years, however, Corvette takes a backseat to no one. The 2021 Corvette Z51, for instance, puts forth 495 horsepower. The fully revamped 2020 Corvette, featuring a mid-engine design, was named the Motor Trend Car of the Year. In the luxury sports car market, Corvette competes head-to-head with Porsche 911 and BMW M4. 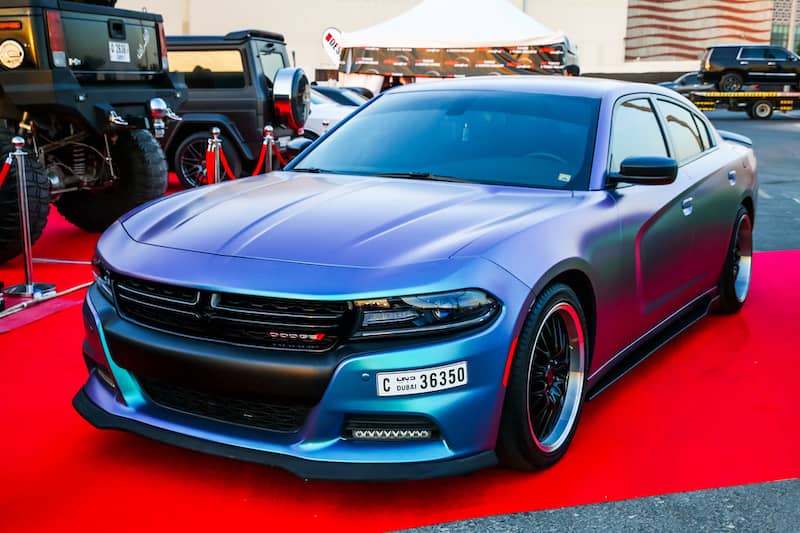 Our runner-up for best muscle car is the second entry from all-American powerhouse, Dodge. The Charger is among the roomier cars in this class, with plenty of luxury appointments and modern options available. The real star is the engine, of course. Even the base model V6 provides plenty of power, but there are multiple engines that go up from there. The 2021 Hellcat Redeye included a supercharged V8 that pumps out 797 horsepower, delivering the perfect tonic to adrenaline junkies everywhere.

A true film star, versions of the Charger have starred in movies such as “Blade,” “Bullitt,” “Fast and Furious” and “Dukes of Hazzard.” It's much more than a pretty face, with nimble steering, astounding acceleration and four doors for convenience. Edmunds rates the Ford Mustang as the best muscle car of 2022, and so do we. Arguably the king of muscle cars since its conception in 1964, the ubiquitous Ford Mustang has everything most people would want from a true muscle car.

Take the 2020 Ford Mustang Convertible. It has a bulky V8 engine, convertible roof, 332 horsepower and classic design, all for a surprisingly accessible price.

While it might not pack the same punch as others on this muscle car list, we think it's the most iconic muscle car in the world. Plus, its accessible price makes it a viable option for many car enthusiasts.

Despite rumors that muscle cars are a thing of the past, our list proves they're still very much alive. Whether you're looking for something like the loud, attention-grabbing machines that dominated illegal drag racing in the 1960s, or a more refined luxury sedan, modern engine technology is now delivering stock vehicles with more impressive horsepower than ever before.

Expand your search to find your dream muscle car by learning how to buy a car online.

Rocket AutoSM allows you to compare thousands of vehicles from multiple dealers.

How To Get Preapproved For A Car Loan

Staying up to date on what you need to know about getting preapproved for a car loan is very important if you're in the market for a new car.

Thousands of car buyers are onto something. Discover the iconic Japanese street cars of the 2000s and which ones are selling fast.