In assessing the best small pickup trucks for 2021, it’s important to note that this is a growing sub-class of the most important vehicle segment in the United States — the pickup truck.

On American roads and highways, the pickup truck is king. As a symbol of freedom and identity, one could argue, the pickup has replaced the horse in American mythology. There is a pickup for everyone — from a used Ford Ranger for a 17-year-old’s birthday to a new, fully loaded Chevy Silverado for a wealthy rancher. Speaking of his fortune, billionaire businessman Sam Walton once said, “It’s just paper. All I own is a pickup truck and a little Wal-Mart stock.”

Offering commanding views of the road and countryside, with a rugged, bouncy ride and tremendous practicality, the pickup truck is so popular because it has evolved to meet the changing needs of American drivers throughout the 20th century. Simply put, you can take a pickup almost anywhere and haul around almost anything with it. What is more American than that?

The U.S. sales figures on pickup trucks are staggering. Of the 14.9 million cars and trucks sold in the U.S. in 2021, the top three selling models were full-size pickup trucks made by American automakers Ford, Ram and Chevrolet/GMC (Chevy Silverado and GMC Sierra are essentially the same truck).

In addition, U.S. and international automakers marketed several popular small or midsize pickups, which sold another 646,000 units in 2021. The competitive midsize pickup market has really heated up in the last few years with the reintroduction of two legendary brands — Jeep Gladiator and Ford Ranger.

Typically, what consumers want from a midsize pickup is everything that they want from a larger truck, but less. Less initial cost, less pain at the gas pump, less bulk to maneuver in crowded parking lots. Of course, a smaller truck also has less towing capacity, less cargo space, and less room in the passenger area.

Each small truck we looked at comes in so many configurations (cab size, bed size, type of engine, etc.) that it is difficult to say which is “best.” So, we let the market speak. According to goodcarbadcar.net, these are the best-selling small or midsize pickups in 2021, from top to bottom. We also looked at horsepower, MPG and the use cases each truck fits. 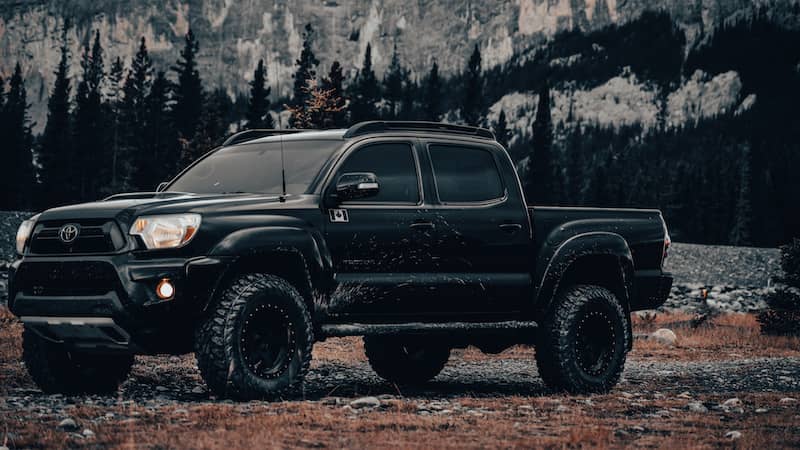 Best for: Versatility, including off-road

Tremendous competition has really heated up the midsize pickup market, but in 2021 there was once again a clear winner among consumers. The Toyota Tacoma had more than double the sales of its next competitor at 252,520 “Tacos” sold. Choosing between all-wheel or rear-wheel drive, the smaller Access Cab to the roomier Double Cab, different bed sizes, and four-cylinder or V6 engine, there are fully 33 combinations of Tacoma to meet your demands.

Tacoma can be a more affordable and practical daily driver (SR Access Cab) to one of the most off-road capable trucks in this class (the TRD Off-Road package has multi-terrain Crawl Control and a locking rear differential). It also earned a spot on our list of best towing vehicles. Toyota’s well-earned reputation for quality and reliability has helped Tacoma become the sales leader in this class for 15 years, and the 2020 model won the Best Resale Value Award from Kelley Blue Book. It also made our Best Fuel-Efficient Trucks roundup for 2022.

Search the Rocket AutoSM Inventory to find the 2021 Toyota Tacoma that is right for you. 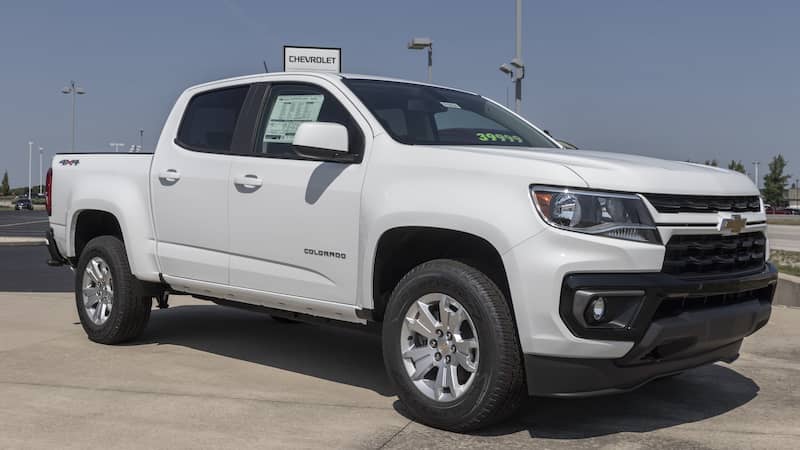 The highly customizable 2021 Chevrolet Colorado continued the brand’s rise in the midsize truck segment, flashing tremendous off-road capability in its ZR2 package and the only diesel option in this class with the 2.6-liter Duramax turbocharged engine. The Duramax delivers 369 lb-ft of torque and 7,700 pounds of towing capacity, enough to pull a large boat. A diesel engine also offers tremendous fuel efficiency, in this case an EPA-estimated 30 mpg on the highway.

Choose from a crew cab or extended cab, short or long bed, and two- or four-wheel drive. You can upgrade from the base-level WT and LT packages to the midlevel Z71, which features a 3.6 liter V6 engine and a smooth 8 speed automatic transmission. Reviewers consistently praised the Colorado’s non-truck-like smooth ride and steering. Overall, the Chevy Colorado has become a solid player in the used midsize pickup market, and in fact the 2020 model won Midsize Pickup Truck Best Buy from Kelley Blue Book.

Shop for your next Chevrolet Colorado in the Rocket Auto Inventory today. 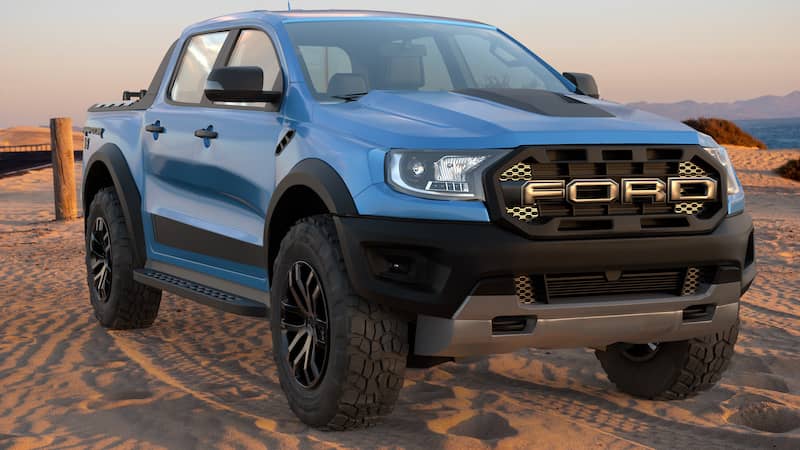 The Ford Ranger is an iconic vehicle brand that stretches back four model generations to the early 1980s. Ford suspended manufacture of the Ranger after 2011, but reintroduced the fourth-generation truck in 2019, and it has established a solid niche in the midsize pickup market ever since. In fact, the 2021 Ranger was ranked as the #1 Midsize Pickup by consumers reporting to J.D. Power.

Across the LT, XLT, and top-end Lariat packages, every Ranger possesses the stout 270-hp, 2.3-liter EcoBoost engine, which rates a best-in-class 1,860-pound payload and 7,500-pound tow rating, best for any non-diesel midsize pickup. The SuperCab Ranger is slightly less roomy for passengers, seating four across two rows of seats with a 6-foot box. The SuperCrew has a larger cabin that seats five with a 5-foot box. If you plan to encounter difficult terrain or heavy snow, look for a Ranger with the Tremor Off-Road Package, which includes a lifted suspension.

Shopping for a quality used 2021 Ford Ranger begins with the Rocket Auto Inventory.

Find out the value of your vehicle, instantly.
Get A Price 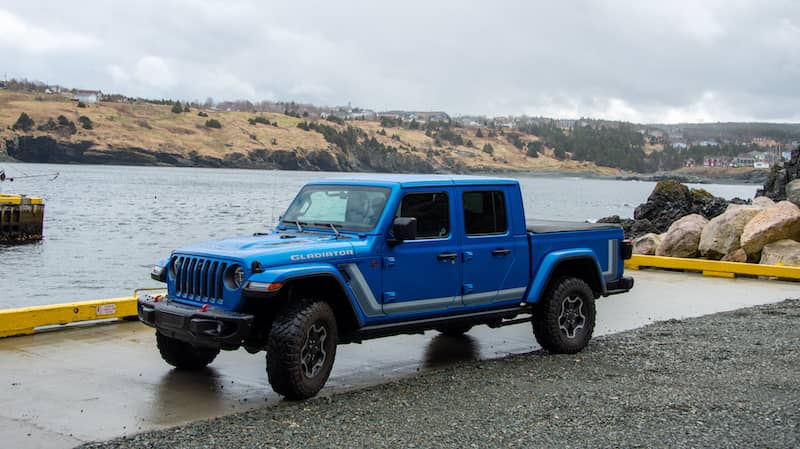 Driving a pickup is fun, but driving a Jeep pickup is even better, especially if you fold down the soft top, remove the doors, and find an interesting two-track. The Jeep Gladiator is another iconic brand that has reentered the midsize pickup market in the last few years, finally answering the pleas of Jeep enthusiasts calling for a Jeep pickup for decades. Jeep’s original Gladiator truck was first introduced in 1963 and later became known as the J-Series until production ceased in 1987. The latest iteration of Gladiator debuted in 2020.

Expect to pay more for a used Gladiator. The truck is slightly more expensive at the base level than Tacoma or Ranger when purchased new, and Jeeps notoriously have a higher resale value in the used market. Like it’s more famous cousin the Wrangler, the Gladiator is well-equipped for off-road fun, especially when you opt-in for Dana 44 axles and the EcoDiesel V6 engine, which generates 442 lb-ft of torque. While the Mojave package is geared more toward dessert running, the Rubicon is built more for boulders and rough terrain.

Search the Rocket Auto Inventory for the right Jeep Gladiator for you. 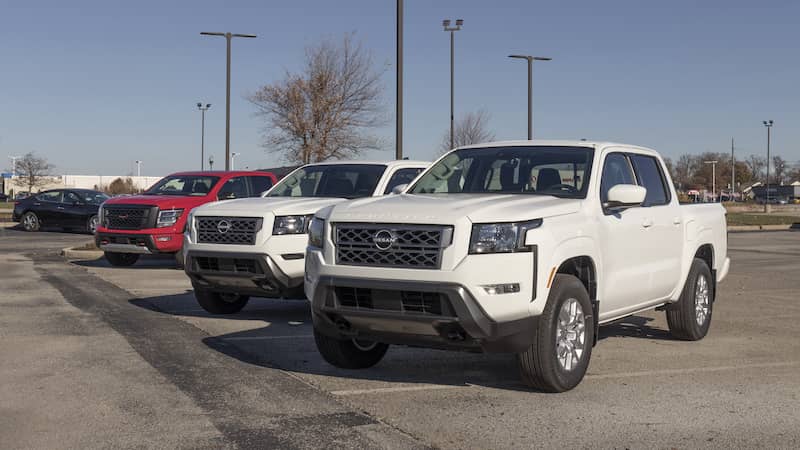 The Nissan Frontier has been a solid workhorse in the midsize pickup truck segment since its inception in 2005. The 2021 model was the last before a major overhaul, which may lead to some good deals in the used market as excitement builds for the re-boot. Frontier’s calling card is its powerful engine and excellent handling. A 3.8-liter V6 sends a segment-best 310 horsepower to the smooth 9-speed automatic transmission. All trim levels have a four-wheel drive option, but the Pro-4X package is specifically equipped to handle rugged terrain or, with its respectable 6,720-pound tow rating, a heavy trailer. This is a solid truck for work, errands, or weekend adventures.

If the GMC Canyon gives a Chevy Colorado vibe, it’s because the two trucks are both made by General Motors and share the same drivetrain and have matching cargo and passenger space dimensions. While Colorado has the more rugged, sporty body design, the Canyon has interior and exterior design cues that have a more luxury feel, particularly in the top-end Denali package which features open-pore wood trim and heated and vented seats.

MSRP for Canyon runs slightly higher than the Colorado, especially in the lower trim packages, but Colorado’s Z71 and ZR2 models can run more due to their extremely stout off-road packages. Despite its more refined appearance, however, the Canyon is still a formidable truck, and has the same engine configurations as Colorado. The 2.6 liter Duramax TurboDiesel gets excellent mileage, produces 369 lb-ft of torque (7,700-pound tow rating is best in class), but less horsepower than the gas-powered 3.6-liter V6.

Shopping for a used GMC Canyon begins with the Rocket Auto Inventory. 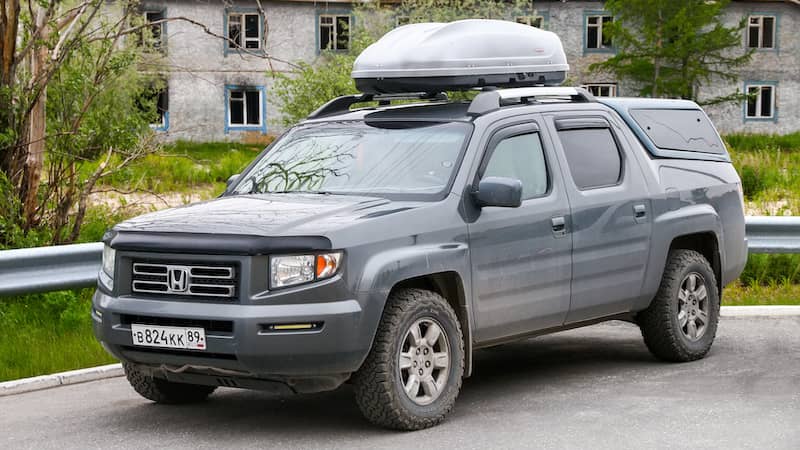 Best for: Smooth ride and handling

One thing that can certainly be said about the Honda Ridgeline: it’s different. For some, different is good, and for others it’s bad. What separates Ridgeline from other trucks in this class is its unibody construction. Some people like this because it gives a smoother ride, more like a car, and every 2021 Honda Ridgeline comes standard with all-wheel drive. These qualities brought some reviewers to call the Ridgeline an SUV with a bed.

Most Ridgeline detractors prefer a more traditional truck, which has a bouncier ride and gets better off-road performance and towing capacity from its body-on-frame construction. It’s not that the Ridgeline can’t do the things a pickup is supposed to do, it just doesn’t do them quite so well. Its 5,000-pound towing capacity is significantly less than competitors in this class, for instance, and it has very limited off-road capability.

With an excellent engine, however, as well as Honda’s renowned touch for overall quality, the Ridgeline can be an excellent truck for someone who occasionally needs the practicality of a truck but favors the ride and handling of an SUV.

Your search for a Honda Ridgeline begins at the Rocket Auto Inventory.

The Bottom Line: A Small Truck Can Have A Wide Range

A number of factors must be considered in determining the best small trucks in America, but the number one consideration is the needs of whoever will be driving it. All of the midsize pickups marketed in the U.S. today are excellent vehicles refined by years of global competition.

Today’s small trucks all come with a wealth of option packages to meet what consumers demand of a small pickup. Some are more suited to daily highway driving with only the occasional need to pull a jet ski or haul landscape supplies. Others need to be more robust to handle daily work duties or for towing a large boat or RV on the weekend. You can get the most truck for your money if you know how you plan to use it.

Looking for a wider range of trucks to consider? Check out our lineup of the best trucks on the used market.

Find out the value of your vehicle, instantly.
Get A Price

Find out the value of your vehicle, instantly.

How To Buy A Car Online: What To Know Before You Shop

Buying a car online is easier than you think. Find out everything you need to know to purchase a car from the comfort of your living room.

The Best Time To Buy A Car

Timing is everything when it comes to buying a car, truck, or SUV. Make the best decision regarding when you buy your next car.

How To Get A Car Loan With Competitive Rates

Getting approved for a car loan is easier than you think. Learn how you can get the best auto loan for financing a vehicle.