Types Of Truck Cabs: A Guide To Truck Styles

If you’re shopping for a used pickup truck, the amount of homework you need to do beforehand is likely more than you think. There are trucks from nine manufacturers on the road today with multiple classifications: full-size, midsize, compact, heavy duty, body-on-frame, unibody, etc. There are more choices than ever.

Another is body style. Specifically, the type of interior space, or “cab,” the truck has and why that’s important to you. For years there was one type of cab — a long bench seat that could sit three across very comfortably. Not so anymore. First, all pickups now come with several variations that include a second row of seating. And second, each manufacturer uses different terminology to refer to what are similar configurations. This guide will help sort it all out.

A Quick Look At Cabs

For reference, here’s how we’d define some common cab types:

Extended cab: regular driver and passenger seating up front with bench seating across the back seat; usually comes in 2- or 4-door configurations

Pickup Truck Cabs And How We Got Here

On American roads, the pickup truck is undeniably king. As of this writing, the venerable Ford F-150 full-size pickup truck has been the top-selling vehicle in the U.S. for an astonishing 43 years in a row. Its top competitors are not far behind. In 2021, the full-size trucks Dodge Ram and Chevrolet Silverado were the second and third highest-selling vehicles of any class. Just these three models accounted for nearly 2.4 million new car sales for 2021. Further, the 13th highest selling model was the GMC Sierra, also a full-size truck and sister vehicle to the Silverado, which General Motors markets separately — this adds another 250,000 to that number.

Add to this the growing market for midsize pickups and, well, you get the picture.

There are many reasons for the popularity of the full-size truck in America, a vast, busy country of people who grow things and build things. A truck offers an elevated seat for a commanding view of the road, a rugged suspension and fortified rear bed to handle heavy payloads, and tremendous versatility. Pickups have become more fuel-efficient over the last two decades in particular.

Perhaps the biggest improvement in pickup design in the last 20 – 30 years has been on the interior design and configuration. Each truck model today is marketed with multiple trim levels from standard work truck to what amounts to a luxury SUV with a box attached. But what has made the pickup more than just a ranch tool — what has turned it into a highly versatile family vehicle — is the interior cab that now extends to a second row of seats.

For years, the pickup truck seating configuration was one long bench seat that could comfortably seat three. Because it was a bench it could not fold down — you could not even store a piece of plywood in the sliver of space behind the seat. This truck had two doors and a window directly behind the seat so the driver could see the road behind them.

The first company to think of opening up additional interior space behind the driver was International Harvester, which created the first Crew Cab Travelette in 1957. This truck had a third door on the passenger side for access to the area behind the seat. It had a full rear seat and room for six and was marketed as a work truck that could move materials and crew to a job site. This configuration was mimicked by similar trucks from Dodge in 1963, Ford in 1965, and Chevrolet in 1973.

There are currently six original equipment manufacturers (OEMs) marketing full-size pickup trucks in the United States, and five of those also sell a midsize pickup; additionally, three more companies make a midsize pickup for the U.S. market. That means there are 14 pickup truck lines, and each manufacturer uses different terminology for these body types. However, all pickup body types fall into three main categories: regular, extended and crew. We’ll stick to these to keep things simple. 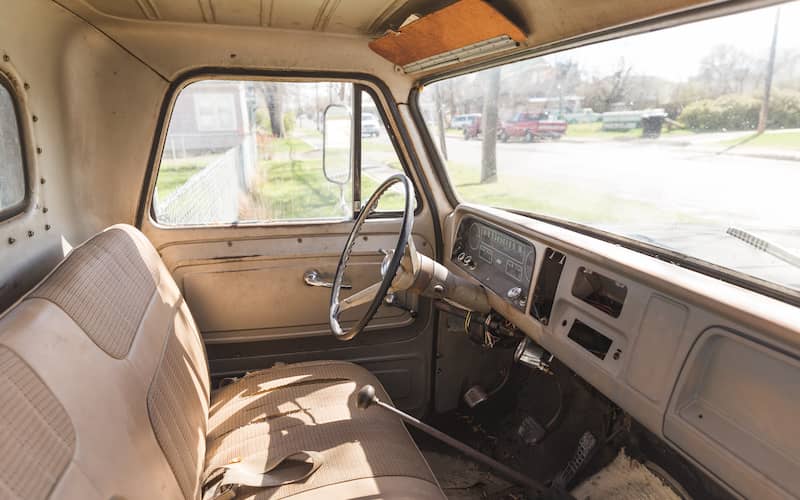 Up until second-row seating really picked up in popularity in the 1980s, this was what people expected of a pickup interior. All pickups today still have at least one regular cab body style, and it typically has one long bench seat that sits three comfortably — some feature two captain’s chairs and a large center console instead. It has two doors, each with a window (in much older models there was sometimes a small “vent window” within the door window and it operated separately with a hand-crank), a front windshield, and a stationary rear windshield that can incorporate a smaller window that slides open and closed.

This body style features a regular front seat/passenger area and a second row with bench seating for up to three. This area offers plenty of room for children or a car seat, but will tax the leg room for a full-size adult. In modern pickups the rear seat can almost always be folded down to increase cargo area. Extended cab trucks can have either two or four doors. The four-door version will be more expensive but offers much more comfortable access to the second row of the truck.

A crew cab alignment also offers a second row of seating that is much more spacious than the extended cab and has plenty of leg room for a large adult. This area is not much different in size or amenities than the second seat of any large SUV, with seating for three and an option to fold down half the seat, or the entire seat, for cargo.

Types Of Cabs Based On Manufacturer

Each manufacturer uses different terminology for their body styles, and depending on how far back in the history of the model, terms might even change for the same model. As of today, here are how the OEMs refer to pickup body styles for both full-size and midsize pickups.

Every commuter, worker, or family has different needs and expectations for their truck. Before deciding on which cab configuration you want to shop for, you should assess your own lifestyle and decide which is best. Here we’ll give some examples on the advantages and disadvantages of each depending on how they might be used.

A regular cab pickup can be used as a commuter or even a grocery-getter, but it should be noted that it offers limited space for anything that needs to stay dry or be locked away such as a wallet, phone, etc. It’s ideal for a work truck — especially since regular cab trucks have the longest beds available of any configuration.

Second-row pickups are better for people who are accustomed to driving a car or SUV. The second seat can not only carry passengers but also groceries or other cargo that needs to stay locked in the car and/or protected from the elements. Folding seats in the rear compartment offer even more cargo versatility.

An extended cab might be fine for people who want a second row of seats that costs a little less than the larger crew cab model. The extra space in a crew cab can make a big difference in comfort for rear seat passengers, especially for older kids or adults who need the extra leg room. In a recent model of the Chevy Silverado full-size truck, for example, the extended cab model had headroom measuring 39.88 inches and legroom of 35.24 inches. The crew cab Silverado had headroom of 40.12 inches and more than 8 extra inches of legroom at 43.40 inches. The extra space is helpful, especially for long road trips with multiple passengers.

The Bottom Line: Know Your Cabs

When shopping for a used pickup, it’s important to decide if you want a truck that has a second row of seating/cargo area. If not, all manufacturers make a one-row version that’s called a regular cab or standard cab style that is more economically priced. If you do want a second row, you’ll need to know what each manufacturers calls its medium- and large-sized cab configuration. When using the Rocket AutoSM Inventory, you can refine your search to include only those trucks that meet your specifications, including body type. Also, be aware that some trucks with a middle-sized cab will only have two doors, which can make accessing the rear seat cumbersome.

Keep learning about your next truck by comparing towing capabilities with our guide to the best trucks for towing.

Ready for your next car?

Get started buying or selling your used car with Rocket AutoSM.
Compare Vehicles

You don't have to sacrifice power to get a great compact pickup truck. Here's our favorite small pickup trucks available.

Best Trucks Of 2021: Ranked By Activity And Size

Looking for more horsepower than your run-of-the-mill sedan? Here are the best trucks of 2021.

While both are great for the outdoors, there are still many differences between AWD and 4WD. Learn the specifics of each and which is best for you.