In the midst of 2020 pandemic lockdowns, a ripple effect occurred. Expecting a drop-off in auto sales, auto companies canceled their orders for computer chips as global supply chains felt the impact of shutdowns across the world. At the same time, Americans took to their homes, increasing the demand for consumer electronics and consequently, computer chips. Interest rates for auto loans remained low, as lockdowns lightened and lifted. Quickly, demand for new vehicles started to outpace supply. Many buyers turned to the used car market to try and make up for this shortage, driving up prices by 40.5% from January 2021 to January 2022, according to the Bureau of Labor Statistics.

As the new and used car markets continued to see heavy competition and price increases, Rocket AutoSM surveyed over 3,000 motorists to determine which popular car features would push Americans to spend more money on a vehicle.

The Top 5 Features Americans Will Pay More For

In today’s new car market, many safety and entertainment features that were once upgrades are considered standard. This isn’t true when it comes to the used car market, with many vehicles potentially lacking features that drivers of new cars enjoy. Yet with the lack of supply and the high demand for vehicles, it is more difficult and costly to get new vehicles. This has left many to turn to the used car market or wait to get a new car. Either way, drivers are paying substantially more and have to consider which features are they unwilling to sacrifice when buying a vehicle, and subsequently would pay more for.

When motorists were given the choice of 25 features and asked if they would pay more for them in a vehicle, 80.6% of motorists chose a backup camera. Backup cameras became standard in vehicles after 2018. But with 66% of drivers having vehicle older than a 2018 model year, they may be missing this feature. The second and third most popular selections were also safety related: a blind spot warning system and forward collision warning. Similar to how seatbelts or airbags became standard safety features in vehicles, high tech safety features have become more of an expectation. Other highly ranked safety features were automatic emergency brakes in seventh place and a 360-degree surround view camera in ninth.

Non-safety options that could be considered “convenience technology” rounded out the top five, with built-in navigation system (74.8%) and USB fast-charging outlets (73.2%) ranking fourth and fifth. Both features contribute to a motorist’s peace of mind. Americans have become so reliant on their mobile phones over the past decade that being without a phone, especially in case of an incident or accident while on the road, is a frightening concept. In that way, USB fast charging outlets are another selected feature that can add to a motorist’s sense of safety and security when driving.

Given Americans’ reliance on their smartphones, it is surprising that the built-in navigation system ranked so highly on the list of features, especially since smartphone syncing features like Android Auto and Apple CarPlay came in as the fifth least desirable option. Built-in navigation takes years to develop, and by the time the systems reach drivers, especially those purchasing used vehicles, they are often already outdated. Even drivers whose cars include more recent systems are said to rarely use them because they don’t find them to be very user-friendly.

Conversely, Google and Apple Maps are constantly updated, user-friendly and easily accessed through drivers’ smartphones. So why are there so many more motorists looking for a built-in navigation system than Android Auto and Apple CarPlay?

The appeal of a satellite-linked built-in navigation system could be that the signal is constant, even in remote areas where a cell phone might fail. Or, more likely, drivers are unaware of the new technology or how to use it. Additional promotion and education around this feature could increase motorists’ interest in it.

Americans Are Less Likely To Pay More For Entertainment And High-End, Luxury Features

When looking at the lower half of this ranking, features that are less attractive to consumers are focused around in-car entertainment or are considered high-end or luxury features. Among these were leather seats, a heads-up display, multizone climate system and rear seat televisions. Of the few performance add-ons included in the survey, a six- or eight-cylinder engine upgrade came in as the 12th most desirable. Motorists who like speed and power in a car might have a tough time understanding that some drivers can take it or leave it. For many drivers, better fuel-efficiency is more valuable than a high-powered engine, and they would rather spend any extra money on safety or comfort.

One purely “comfort” feature that consumers like is heated seats, which is the sixth most popular option chosen. While 71.7% would pay more for heated seats, only 53.8% percent would opt for air-conditioned seats, nearly an 18-point difference. Air-conditioned seats were introduced more recently and fewer people have experienced them. A heated steering wheel, another fairly new feature, also placed in the bottom three features presented in this survey.

It seems to be that consumers naturally place more value on features they have experienced and know more about. But, as they become accustomed to using new features in their car, many of those features can be quickly deemed essential. As little as 20 years ago, most car doors were unlocked with an old-fashioned key. Now, every new car comes with a remote key fob. It is considered essential by almost everyone. The same could someday be said about air-conditioned seats.

Only 17.7% of baby boomers will pay more for rear televisions—the lowest preference expressed about any feature from any age group. Conversely, 50.6% of millennials would pay to have rear televisions in their vehicle. The need for third-row seating mirrored this discrepancy between these two groups, with 58.1% of millennials preferring third-row seats, a 35-point difference compared to the 22.9% of baby boomers. 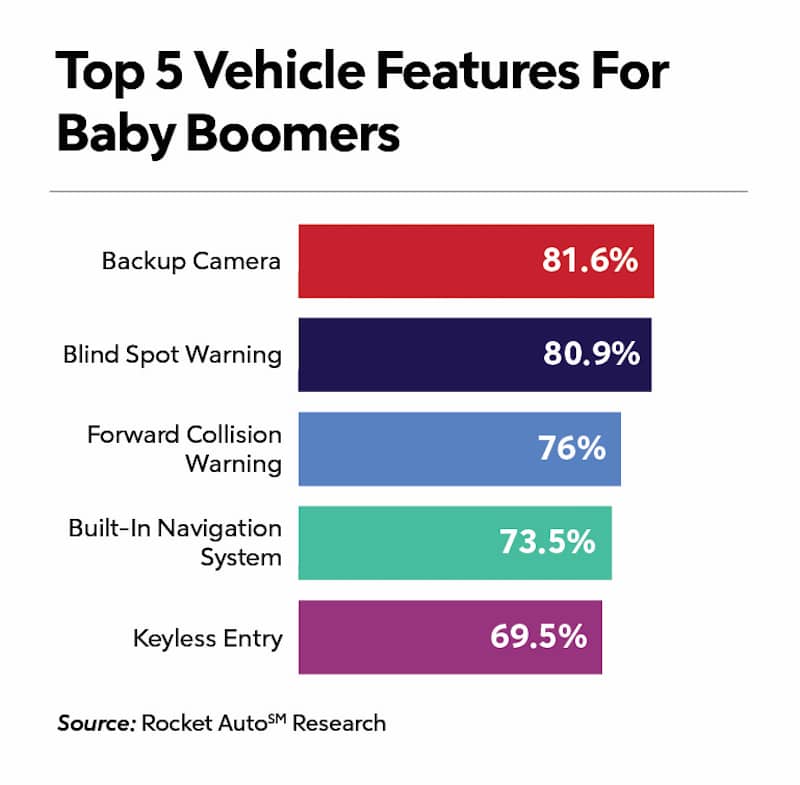 Baby boomers ranked highest among the generations (81.6%) for their willingness to pay more for a backup camera and their interest in having blind spot warning (80.9%). This was followed closely by forward collision warning and built-in navigation system. By keeping them safe on the road, these features can help support senior drivers in maintaining their independence.

While 80.3% of millennials also chose the backup camera as a can’t live without feature, it almost tied with their desire for USB fast charging outlets (80.2%). Millennials are the first generation to grow up using mobile phones. Therefore, it’s no wonder that the idea of losing access to this lifeline, even momentarily, doesn’t appeal to the generation.

When trying to understand baby boomers lack of interest in certain features, consider that baby boomers show less interest in new technology features—many have been driving for 50 or 60 years without them and have been perfectly happy. Millennials however, have grown up in a world of rapidly changing technology. Not only do they adapt more easily to new technologies, they embrace them with enthusiasm. It also helps that the older millennials are now 40 years old and have more expendable income to afford vehicles with these options in the current market.

The Features Americans Are Willing To Spend Money On

While some features are more popular than others, Rocket Auto’s survey finds that most of them are still attractive to more than 50% of motorists. If motorists have the money, more than half are likely to pay extra for a car that includes them. But if they must prioritize features in a vehicle they are purchasing, they will first seek a vehicle with features that increase safety and peace of mind. This will then be followed by comfort features that they already know they enjoy, like heated seats.

While drivers like added features and are willing to pay for them if they have the funds, they also like what they know. These are features that once might have been on a “nice to have” list but through experience have become a necessity to motorists. As automakers continue to innovate newer and better features, they should consider what the next new nonnegotiable feature will be.

To learn about motorists’ preferred car features, Rocket Auto surveyed 3,221 car owners and leasers. The sample was controlled to ensure there was an even split of men and women surveyed and that one-quarter of respondents were Gen Z (aged 18 – 24), one-quarter were millennials (aged 25 – 40), one-quarter were Gen X (aged 41 – 56) and one-quarter were baby boomers (aged 57 – 75). The survey was conducted online from January 12 – January 21, 2022.

What Is Good Mileage For A Used Car?

When you are shopping around for a used vehicle, you may wonder how many miles should a used car have?

If you’re looking for an SUV with a diesel engine for your long commute or just to take you around town, let us narrow it down for you with this list of best diesel SUVs.